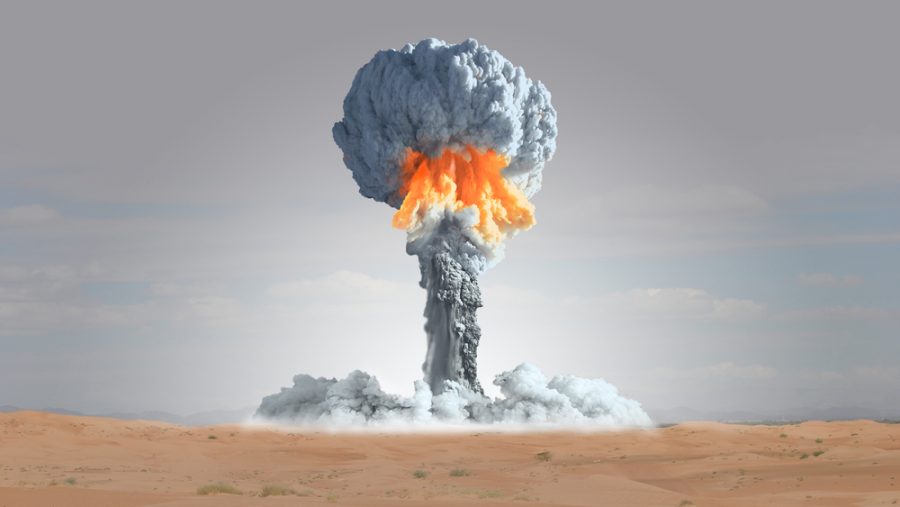 Every Matter contains vast amounts of energy. To understand it better, we must keep in mind Einstein’s famous E=mc^2 equation, where E means Energy, M means Mass, and C means speed of light. It means that when the speed of light squared is multiplied by mass the amount of energy released is immense and huge.

An atomic bomb is made up of uranium and plutonium that have various types of atoms and smaller particles. Hence these elements are quite unstable and discharge radiation continuously. Now, if an adequate amount of energy is applied to the atoms by a nuclear reaction, then the unstable particles will be released, and hence, large amounts of energy that was stored in the matter will be released. These released particles will in turn break up into more atoms, inducing more and more energy to explode. This kind of chain reaction causes the release of huge amounts of energy, and hence causes a very big explosion. There are two types of atomic explosions namely, Fission and Fusion.

Every atom has a neutron. In Nuclear fission, the nucleus of an atom breaks up into two parts due to a nuclear reaction, thereby releasing vast amounts of energy and radiation. If a small part of this radiation touches an atom of uranium, the uranium atom breaks up discharging more and more radiation and releasing energy. So when most of the uranium atoms are broken up and transformed into energy, the result is a violent explosion. This process requires isotopes of Uranium known as Uranium 235 or Uranium 238. Both isotopes of uranium are highly radioactive and unstable.

Generally, for fission bombs, uranium 235 isotope is preferred rather than the uranium 238 isotope. Since uranium 235 can undergo fission at a faster rate, it is the preferred isotope for production of nuclear weapons and nuclear power generation. When a neutron touches the nucleus of uranium 235 the nucleus immediately absorbs the neutron and becomes highly unstable. This nucleus then divides further and breaks up, giving off large amounts of gamma radiation and energy. This abundance of energy and radiation is discharged with lots of aggression and results in the atomic bomb explosion.

The essential components of nuclear fission are Uranium 235 or Uranium 238 isotopes.

The Fusion bombs or Hydrogen bombs or thermonuclear bombs are more efficient in comparison to Fission bombs. These bombs comprise of hydrogen atoms. It combines the nuclei of four different kinds of hydrogen atoms to make one helium atom. To do so, a substantial amount of energy is needed to compel the nuclei to bond with other elements. In this kind of bombs, two types of gases are used for reaction-namely Deuterium and Tritium. These gases should be stored at high temperatures to enable the process of nuclear fission.
Various kinds of methods result in nuclear fusion, some of which are hot and some of which are cold emitting high temperature and pressure. In the fusion process, large amounts of energy and radiation are discharged in the atmosphere.

The essential components of nuclear fission are Deuterium gas and Tritium gas.

9 Signs to Learn If You Have Kidney Disease

Patient Identification and Their Growing Importance in Healthcare

7 Things You Need to Know about Laser Skin Treatment